Home/News/Online Events/Outline notes that May 17th is International Day Against Homophobia, Transphobia and Biphobia.
Previous Next 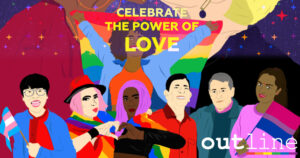 It is a day where we unite and come together to draw the attention of decision makers, the media, the public, corporations, opinion leaders, local authorities, etc. to the alarming situation faced by people with diverse sexual orientations, gender identities or expressions, and sex characteristics.
The day is celebrated in more than 130 countries, including 37 where same-sex acts are illegal. It has received official recognition from several States, international institutions such as the European Parliament, and by countless local authorities.
Even if every year a “global focus issue” is promoted, the International Day Against Homophobia, Transphobia and Biphobia is not one centralised campaign; rather it is a moment that everyone can take advantage of to take action, on whatever issue and in whatever format that they wish.

The theme this year is “Together: Resisting, supporting, healing”. Share your stories and help us to celebrate the power of love.