What is Gender Identity?

Gender identity is one’s innate self of being – be it male, female, in-between, fluctuating or neither. Conventional gender has been seen as a male – female binary, however, that concept has been expanded to encompass all types of gender identity human experience to include non-binary (genderfluid) and genderless categories (agender).

Gender identity could be summarized as how much one feels as a male, female, or something else. This means that, similarly to sexuality, gender identity lies on a spectrum. While to majority of people it is a constant one category, it does not mean everyone experiences it the same way throughout their life.

Gender identity is different to gender and sex. Sex, assigned at birth, is corresponding to the traditional way of seeing people. It is the biological binary or either male or female based on anatomy. Gender is a social construct. Generally, gender is the way in which the individual is supposed to act according to societal norms – what is expected from a person based on their biological sex.

One’s gender identity does have to correspond with sex they were assigned at birth. Gender identity is the inner knowledge of self and outer expression of it. 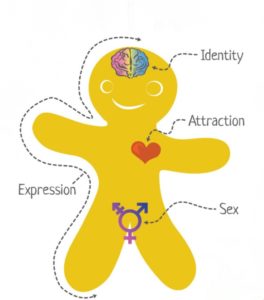