An outline volunteers reflection on IDAHOBT 2019

IDAHOBT developed as an opportunity to raise awareness of the human rights of LGBTIQ+ people but it is also a chance to celebrate our diversity. Many organisations take that chance to release reports about the situation of LGBTIQ+ rights and discrimination. Discrimination is widely speaking any form of behaviour resulting in individuals not feeling safe in the created environment on the ground of their identity or are denied the same chances as people who identify differently.

To recognise discrimination, one needs to be aware of what it is and how it can affect individuals. The following definitions from the idahobt.org.au website provide some examples (https://www.idahobit.org.au/index.php/get-active/the-stats):

Homophobia – verbal homophobia is the most common form. Things like name-calling, rumours and abusive words (‘fag’ or ‘dyke’). Phrases like “that’s so gay” which compare sexuality to words like ‘crap’ can have a negative impact. Homophobia also include abusive threats or actual physical violence, sexual harassment and deliberately excluding someone because of their sexuality.

Biphobia – abuse towards someone who is attracted to more than one gender, and even includes when that person’s identity is erased. This can be in the form of telling someone that their sexuality is “just a phase”, or even telling them to “pick a side.”

Transphobia – describes negative feelings or actions towards someone who’s trans or gender diverse. You may have heard transphobic language like ‘tr*nny’, or seen restrictions on the way that people are allowed to express their gender. Things like which uniform you’re allowed to wear or toilets you can use. Transphobia can also include abusive threats or actual physical violence, sexual harassment and deliberately excluding someone because of their gender.

Interphobia – Intersex discrimination happens when a person is treated less favourably than another person in a similar situation because that person has physical, hormonal or genetic features that are neither wholly female nor wholly male; a combination of female and male; or neither female nor male. This can include exclusion or mistreatment in medical services.

IDAHOBT 2019 was as eventful as ever and celebrations have been in full swing across six continents. The leading states in equality promotion have not disappointed (with the events organized by Australia and Canada being the most notable ones). More importantly, though, equality promotion events have found their way to African countries such as Kenya and Botswana. Celebrations in Chile keep being one of the most prominent with a majority of the state institutions joining in. The biggest victory of this year, however, could have been seen in Taiwan, which on May 17th, 2019 became the first Asian country to allow same-sex marriage.

This year’s theme of “Justice and protection for all” have been incorporated widely by international organizations, EU being one of the more active ones (have a look at this year events: https://www.ilga-europe.org/resources/news/latest-news/17-may-2019-whats-happening). The UN Refugee Agency launched consultations on LGBTIQ+ refugees’ rights to finds ways on protection them from harm more effectively.

There is a lot to be enthusiastic about and as some ground-breaking events have taken place, but many worries stay with us as well. Although, equality advocacy has made its way around the globe, some societies are not as open as others. With the events in Uganda being cancelled by the minister of Ethics and Integrity at the last minute and the anti-gay social media campaign in China resulting in the same, one must be aware that, although enormous progress was made globally and locally, there is still a long way to go before we reach the desired equality in social and legal terms.

Even though the UK has made an enormous progress in the promotion of LGBTIQ+ rights and equality there are still many incidents of discrimination across the country. Looking at the ILGA Rainbow map, one can see the UK is one of the leading European countries in the LGBTIQ+ rights but that there is still plenty of room for improvement. 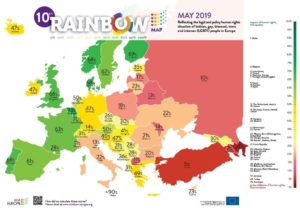 As the UK Office for National Statistics reports (https://www.ons.gov.uk/peoplepopulationandcommunity/culturalidentity/sexuality/bulletins/sexualidentityuk/2017)

From the Stonewall report on Hate Crime 2017 (https://www.stonewall.org.uk/lgbt-britain-hate-crime-and-discrimination) the key findings show that discrimination against the LGBTIQ+ community is not that rare even in the UK.

The numbers increase when looking specifically on the trans community or people from more than one minority group and the general percentage of hate crime incidents have increased in the 2016-2017 comparison. Many crimes are reported to happen in public spaces such as a café, restaurant, bar, nightclub or sport events. Discrimination is also noted in social services and places of worship.

What is important to keep in mind is that, although those reports are worrying, there is also many places and initiatives all around the UK and the world helping the community and its status. This is a reminder that there is still a lot to do but there are also enormous changes happening everywhere already. The future has never looked so promising and we should not lose the sight of that.

WhatsApp us
Leave this Page Quickly
This site uses cookies: Find out more.