We continue to share the life and work of amazing LGBT+ writers by speaking about Jackie Curtis. She was an American actress and playwright. Best known for being one of  Andy Warhol’s muses, she also wrote numerous plays, such as Glamous, Glory and Gold, Femme Fatale or Amerika Cleopatra.

She grew up with her aunt Ann, who owned a bar, where Curtis often worked and performed in drag. And even though it wasn’t a gay or drag crowd, if anyone had a problem with it, Ann would have “punched them out”.

Curtis did a lot for the trans community by making a conscious effort to cast many trans actors in her plays, to make up for the severe lack of representation in theatre.

Assigned male at birth, Jackie preferred the pronouns she/her, though she hinted she did not fully identify as female either

Jackie took various trans and drag performers under her wing, like Candy Darling, who made her on stage debut in Glamour, Glory and Gold, alongside a young actor named Robert De Niro. Her plays are said to express the essence of East Village drag, and were critically acclaimed by many.

Curtis sadly died of a drug overdose in 1985, but was immortalised in Lou Reed’s Walk on the Wild Side “just speeding away / Thought she was James Dean for a day”. 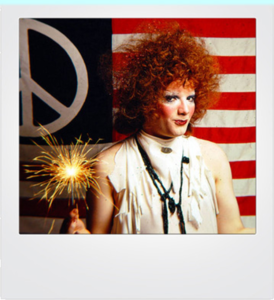